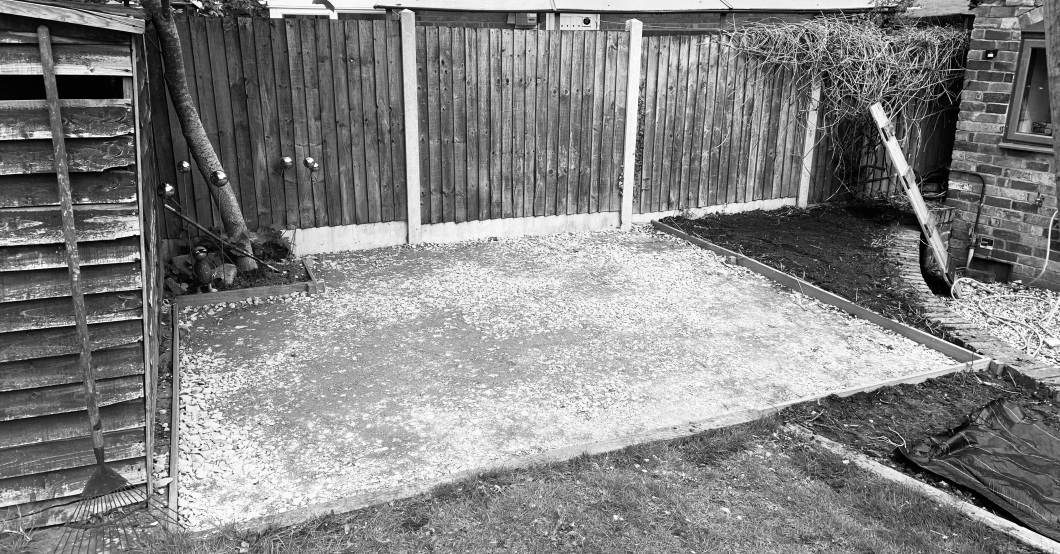 Its day 45 folks. Would you believe it and i’ve only gone and started to build a Parteo, this will take some time as I get scared of this sort of constructive DIY. The potential of royally fucking it up is huge, and by doing it myself puts me under an immense amount of pressure, so much so that we talk about big DIY projects which others will do, people qualified for the task, let’s face it if you gave me dough I couldn’t make bread, let alone the dough in the first place which is why you would give it to me.

Today, I used a whacker to flatten 2 tons of Hardcore/ Type 1MOT aggregate which I moved 12 metres there and back across the garden from ton bags, in a wheel barrow with a hole in, and a flat tyre. My son raked it out, I was in charge of logistics, which was absolutely awful; you try moving a fully loaded barrow with a flat tyre. Its rubbish and this is the reason that people like me call upon the services of the professionals who do this sort of thing.  If you want a map, i’ll do it, otherwise it’s probably best to leave me alone.

In hot tub news, it turns out the guys across the road in the little close are not the only ones in the close with a hot tub; there’s two out of four, it lies in the balance as to wether or not we can call it a close of swingers. I’m erring on the side of the definite. Sooner or later everyone across the road will succumb to their own animal instincts and before you know it there will be a filthy image of Bacchanal Debauchery on the front page of the Great Witley and Shrawley Times. You heard it here first.