My daughter had spotted the #lightnightWorcester in the local paper, come to think it was more likely face book or instagram or something equally persuasive and numbing. It sounded like fun; a carnival of lights parading through the main high street of Worcester, with light installations in Cathedral Square and sound and light shows along the way.

The rain which had plagued us for so long had stopped and so a night out, well a couple of hours watching a specatacle of illumination could be fun. So we agreed to go and so was under mounting  pressure to be convivial for once; Grumpy Dad.

The streets packed with families, some dogs, many kids, all the shite tat shops were out, the trolleys full of really poor quality lightsabers, the spinning lollipop shaped lights, any shops which sold sweets or sugary snacks were also open to fleece the unsuspecting parents racing home to pick up the family before racing off into Worcester, no time for even a bit of toast or to put Dad jeans on. I work at home, I  can change when I want and usually look a mess.

We walked all the way from the car park to Cathedral Square and then back to select a suitable place, my son, already spitting feathers as to what are we doing and why can’t we just go, and could we get some brain-lickers, whatever they are. But in the distance we heard the thumping of a multitude of drums, turns out it was 8 drummers drumming, replacing the 8 maids a milking, relegating them or promoting them to number 12, presumably 4 of the drummers would have had to fraternise with the 8 maids to make up the numbers, to make sense of the situation.

Dressed in white with pharaoh outfits, with reflective strips and strings of lights around their waists. Demonic face paint coloured purple by lights in the drums permanently illuminating the diabolic visages, coupled with the tribal repetitive hypnotic rhythms gave them a shamanic appeal. Following the drummers were a group of 50 or so folk with multicoloured umbrellas, twirling them for all they were worth, LED lights slung around their waists completing the kaleidoscope of rainbow colours. Behind the dancing umbrella people followed the general public in a frenzy whooping and hollering like the Bacchus, life was insanely good. As the congregation neared the Cathedral Square, the crowds were peeling from under the shop canopies to follow the Light Pied Pipers, to where no one knew. The Elgar Statue was dripping with people trying to get a look , the balconies around Cathedral Square out side Miller and Carter, the fancy Steak restaurant with ideas above its station, and the quirky Cosy Club where industrial setting is an excuse to not complete the renovation work, all were full to the rafters, chanting

As the procession wheeled round the back of the statue a giant hole opened up underneath the astro turf children’s play area, and the drummers peeled off to the sides and then the umbrella people shielding the hole form view and the crowd surged forward, falling in to the hole, a giant pit, a deep dark pit where no one could hear the screams above the drums and no one could see where the people were going. They just kept on coming, they just kept vanishing.

As soon as the pit was opened the pit closed up and the children’s astro turf play park was there again. The drummers and umbrella people did a final lap of Cathedral Square as did the umbrella people, then folded up their unbrellas and dispersed amongst the crowds, leaving the drummers to stomp off down the high street, around Greggs they were no more.

On the way home I mentioned to Mrs T that the promoter of this event had done an amazing job, there must have been thousands there for what was a pretty unusual spectacle, next year they better get some more light shows along the way if they wanted it to be as popular. 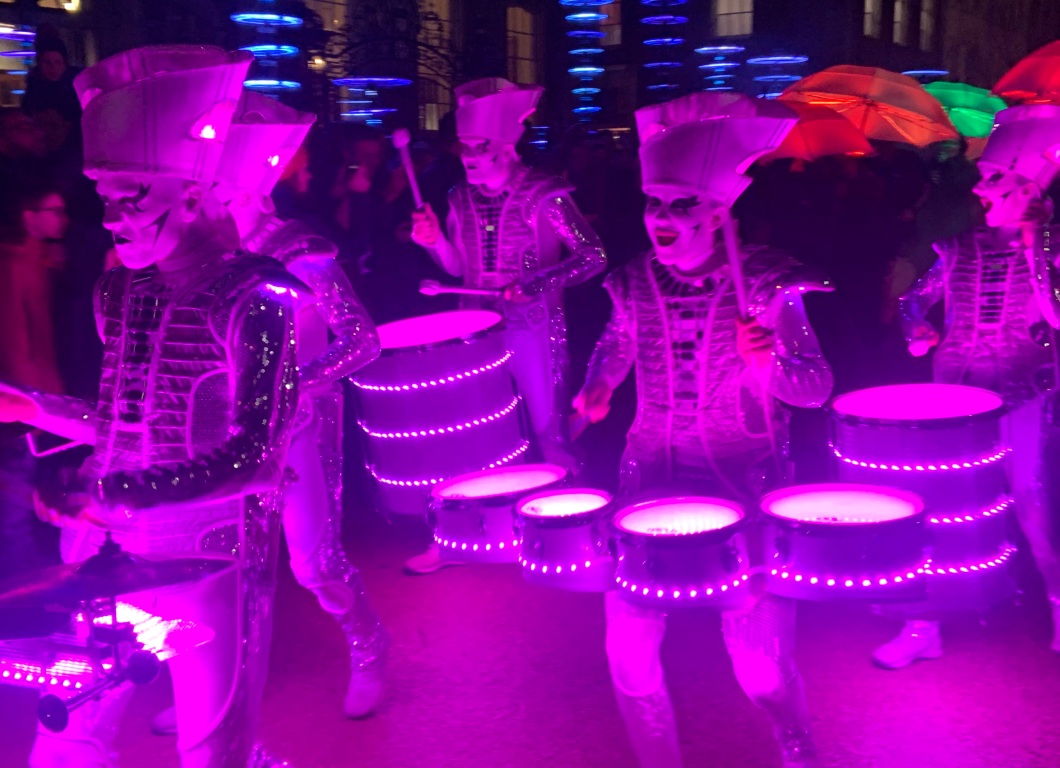