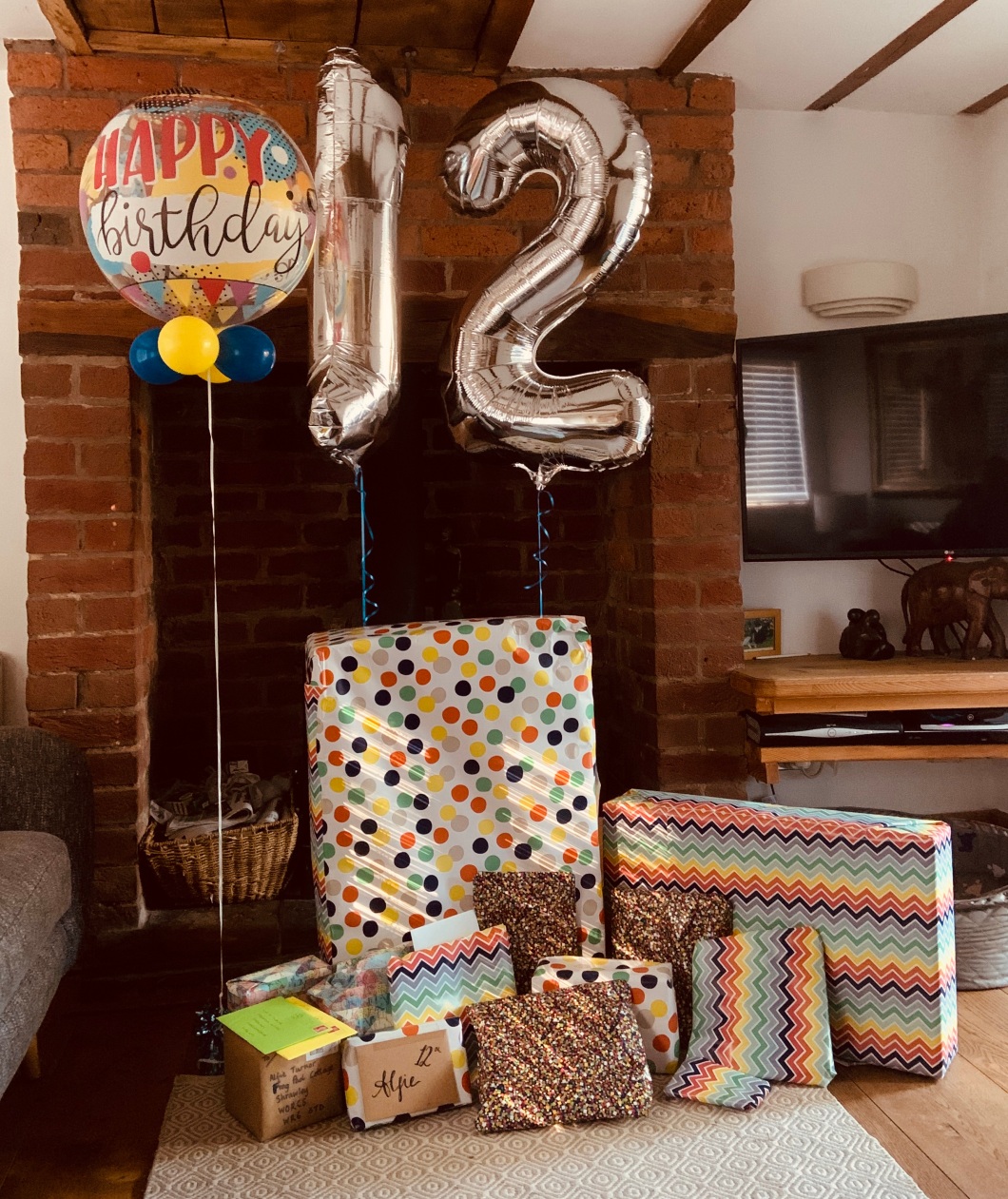 Its a birthday today, not mine, my son’s he’s 12 and in celebration and in the absence of him and his mates being able to get together anywhere other than a garden with too small an area to play football, too many freshly planted flowers and two neighbours we’ve annoyed over these past 4 months, by rattling the fences with footballs and too many times popping over to ask them for our ball back. Today we decided as a family to head to a Cray-Zee golf course for some astroturf action. A course with a theme, all be it slightly tenuous; I think an aeroplane has crashed in a jungle (Opposite Clains garden Centre) where there are wild animals roaming (A life size Elephant which trumpets, sort of and badly through a speaker hidden in its foot) A mute cheetah, some monkeys and a gorilla. There is a bamboo type hide where there are speakers making what I imagine are Primate sounds, and the 18 holes are bordered towards the hole end with boulders probably purchased from the garden centre opposite the jungle. Its all a little too convenient, but just so as you don’t feel you are in an actual jungle when you walk under the pergola onto the cousrse they remind you of your whereabouts by playing a Tel Star version of the Tight Fit classic, “The Lion Sleeps Tonight” In the jungle the mighty jungle, etc… Ah now it is all clear as to why there is an old wrecked Cessna 6 seater wedged in to a rockery, we must be the pilots, and passengers, but hold on where are the trees? There’s palm trees, maybe a handful, and why are there loads of other folk here and why are we playing Cray-zee golf here? I remember Cardiff has an indoor Cray-zee golf course on the forth floor of a shopping centre up towards the car parks, thats a jungle theme too. Maybe this is based on a fact that an actual plane crash occurred in a jungle and they had a set off golf clubs and balls to pass the time while they waited for rescue. But everyone uses putters on Cray-zee golf courses, rather than a selection of clubs, there’s no need, maybe the passangers were on their way to a putting convention, who knows, this is where my theory falls down, but one thing is for sure, this sort of thing wouldn’t happen in a rain forrest, always Jungle, fact check it.

Socially distanced and all one way traffic, this would never happen in the Jungle, i’d suggest that this sort of game would be played on the fringe of a beach, where the jungle meets the sea so any excess clubs could be arranged in an SOS configuration on the sand, and any golf bags could be burned. It is believed that on Sentinel Island the uncontacted tribes there are understood to be experts at Cray-Zee golf as they are seen to be throwing what modern thinkers assumed to be spears but upon closer inspection and corroboration with online conspiracy theorists are reckoned to be golf clubs, specifically putters.

A lesser known Dubious Fact of the Day there for you, see what you learn when you get stuck in to the ministry? Cannibals aside my son, had a very good day; A lunch out, Cray-Zee golf in the jungle opposite Clains Garden Centre, a trip to feed C’s G-Pig, still struggling on living the pastoral life of WR6, with a view over the garden and pool, which, I’ve got to be honest is looking slightly green. In the early evening we all went out for another meal and suffered severe food coma as a result of a very finely cooked pink bit of rump steak and an unnecessary portion of chips. I’m suddenly conscious of my weight, my belly seems to be causing my posture to slightly change, I feel like I’m leaning back arching my back and spend a lot of time huffing and puffing, heaving and ho-ing. This must stop and a suggestion of a nuance of an idea to start running again is gestating in my mind’s womb, which I hate, the running, but always felt better when i’d done, and got back home. I’m not trying to run before I can walk, or even to put the cart before the horse but even i’m starting to think my shape isn’t altogether what it used to be, from certain angles I alarm myself; the solution being to avoid those angles or better still embrace the angles and try to do something about it.

I feel another Year Zero theme emerging, watch this space pop pickers, lets see if I can attain Beach Presentability by starving myself and running around for the next holiday I will have in 2025, the rate things are going. Corona seems to be having a little Renaissance at the moment and the British Government in their infinite stupidity and cretinous proclamations are adapting as they always have by deciding policy with a game of Ker-Plunk.