Its been 3 days and a lot has happened since we last spoke, I was keeping an eye on my stats and was creeping nearer and nearer to beating my record of number of visits from you wonderful folk. 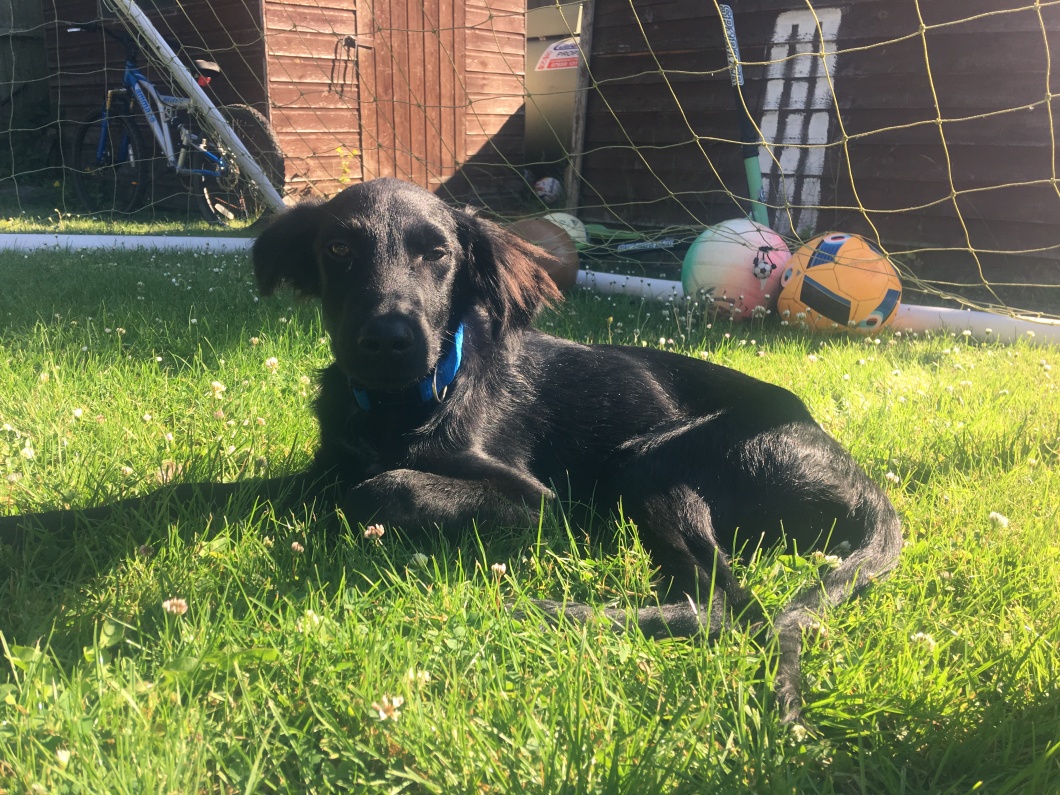 He’s called Benny, he’s 4 months old and from Cyprus, (a island in the Mediterranean partially Greek, part Turkish) Anyway he was just a day or two from death in the “Kill Pound” which is a truly awful name for I imagine what is a hellish place. The rescuer went in to save another, older dog and Benny was in the same cage; she could not leave him! So hooray for her and hooray for Benny. He’s really cool, he comes house trained which secretly I was trying to ignore the fact that I would have to train him myself. Its a real nightmare with the poo and wee and so thank the lord he seems to be extremely conscientious about that sort of thing! He doesn’t come to his name yet which could be due to him being ignorant or possibly the language barrier, I’m joking of course, I am fluent in Cypriot;

So Thursday we all went to be on time and had to wake up at 1am to travel down to a motorway service station for 2:20am where the transfer of Benny would take place. He had flown to Paris from Cyprus on Wednesday, then was transferred to a crate in a van where he spent 13 hours travelling up to near where I live and Strensham Services. A long day, he slept on the kids on the way home and slept really well throughout the night getting up at 4am and whining from his crate downstairs. I feel after 3 mornings, this 4am wake up is becoming a thing, the mornings are getting light at this time and the birds are all awake; the dawn chorus some people call it, they may be the ones who don’t hear it every morning. 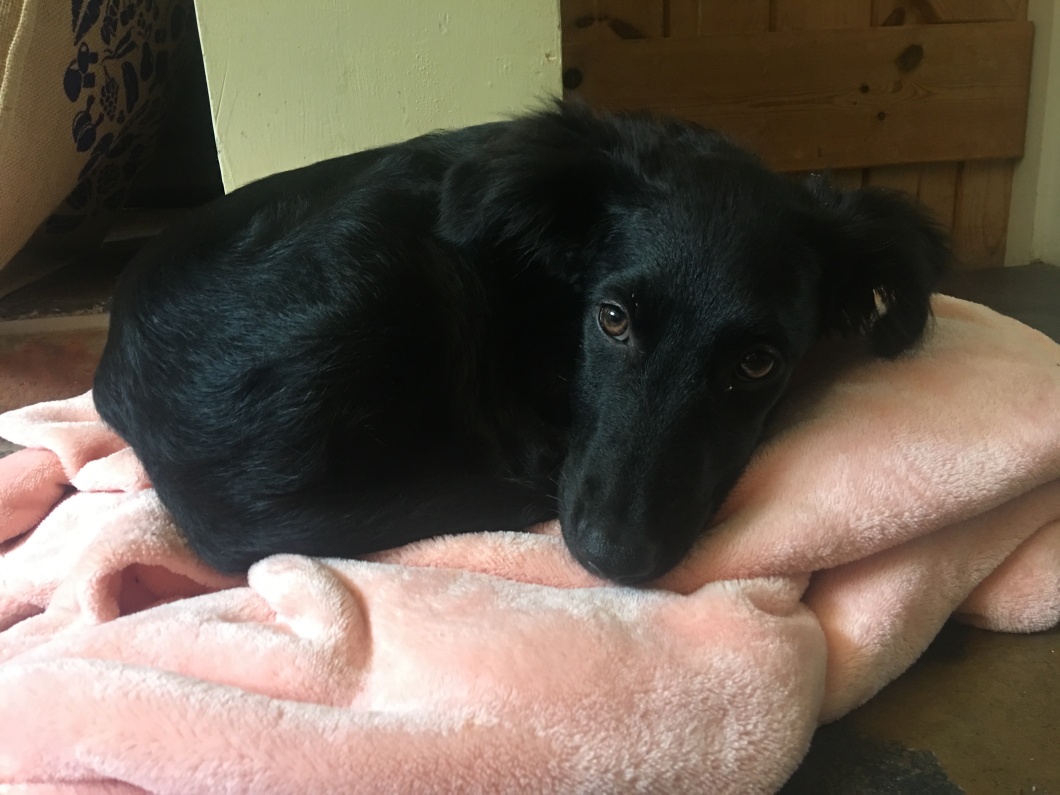 Thats it now, no more cute shots, it’ll be action shots all the way from now on. So a new member for the ministry and with an extra body comes possibly a change in the calculations of the lottery numbers, I will have to consult the troops over this potentially life changing matter, we have had pretty poor luck with out numbers at the moment and so should we change the one number which applies to all of us and risk not winning the jackpot or do we keep it as it is and risk moral bankruptcy as we cheat the numbers? Who knows, its too big a question for me alone to answer, it calls for a debate.

Ok fact fans, this is a belter, as I was walking through the woods today with Benny and my son, the intensity of the flies and their buzzing was really apparent and we tried to guess how many flies there are in the wood and then in the whole world. Of course no one can possibly know the exact figure, that much is obvious, but it turns out, here it comes it’s sooo good this one,

For every one person in the world there are 17 million flies! To give them all an English language name would be impossible too without repetition as there are a little over 170000 words in the 20 volumes of the Oxford English Dictionary let alone names.  Anyway this is what I get up to on my lazy Sundays.

N was telling us about how he had bought a grinder and had to go down to Bournemouth to pick it up. There is still some confusion as too what he actually meant, we assumed that he was referring to the slightly controversial dating app, not at all popular around the Worcester area, hence the need to travel. Anyway all will come clear on Tuesday; he’s going to rise early and go down to pick up this Grinder, he said he’d show us the photos. Did I mention N doesn’t have salt and vinegar on his chips either?

Sad news just in, one of the co-creators of Bagpuss, the Clangers, Ivor the Engine, Poggle Wood, Peter Firmin has died after a short illness, may he RIP, he provided the backdrop to my formative growing up years as a young lad of the 70’s 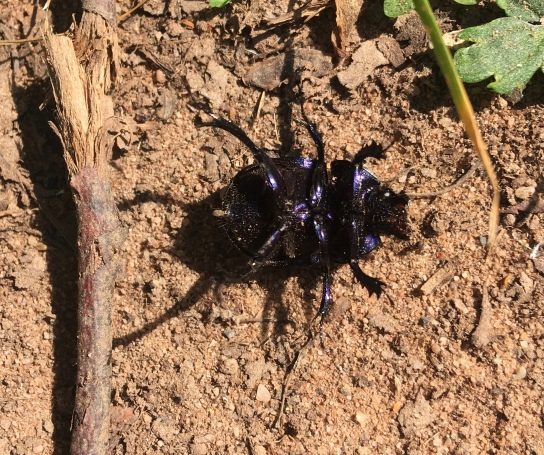 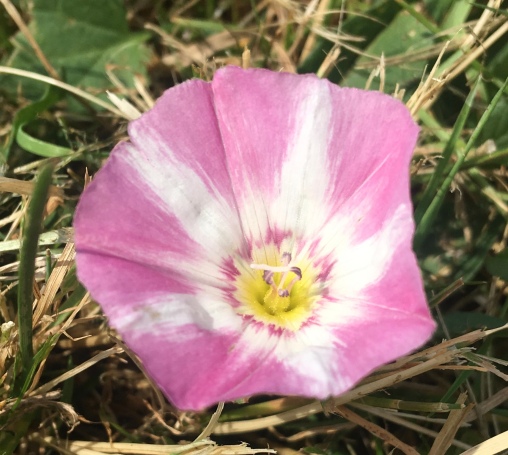 I did, before you ask, flip this little beetle over after taking the photo, but there were loads of them, all glistening purple in the sunlight and all on their backs, I have no idea why, maybe he was lucky or maybe he wanted to be on his back, I didn’t ask and will never know unless my friend Dr S. (for the sake of anonymity) can tell me otherwise, and who knows we may get another undisputed science fact of the day. What is this flower also folks? Buggered if I know.