Well, a week of chaos rumbles on as the working week thunders on into South Wales; Cardiff, Newport all the way to Swansea and beyond to St Davids. All these places under extreme torque from lack of staff, due to premature retirements, stress related illnesses, a botched transfer up to Scotland which should, could have been executed so much smoother had our manager had a modicum of common decency.

He’s a shit manager and is a toothless manager merely doing the dirty work for the higher level managers who do nothing of the sort, manage I mean. They should have seen this coming, the demographic in the company was plain for anyone to see, and for anyone to plan into the future, as someone once said it’s not rocket science and it really isn’t, but we are all armchair managers as far as football goes and so we remain armchair managers as far as our careers go. The difference being we are the poorly paid footballers and our managers are actually playing with our lives, messing with our lives and they have no clue what is going on. One day I’ll name and shame the company, but its more than my job is with right now and you never know who is watching.

I should probably say that visitors of a sensitive disposition should turn away now or don’t look to carefully at the severed thrush head, presumably left by some sort of bird murderer on the track to mark as a warming to other birds to watch where they are walking, or indeed to probably fly as this wouldn’t happen. Keep your eyes open little birds. 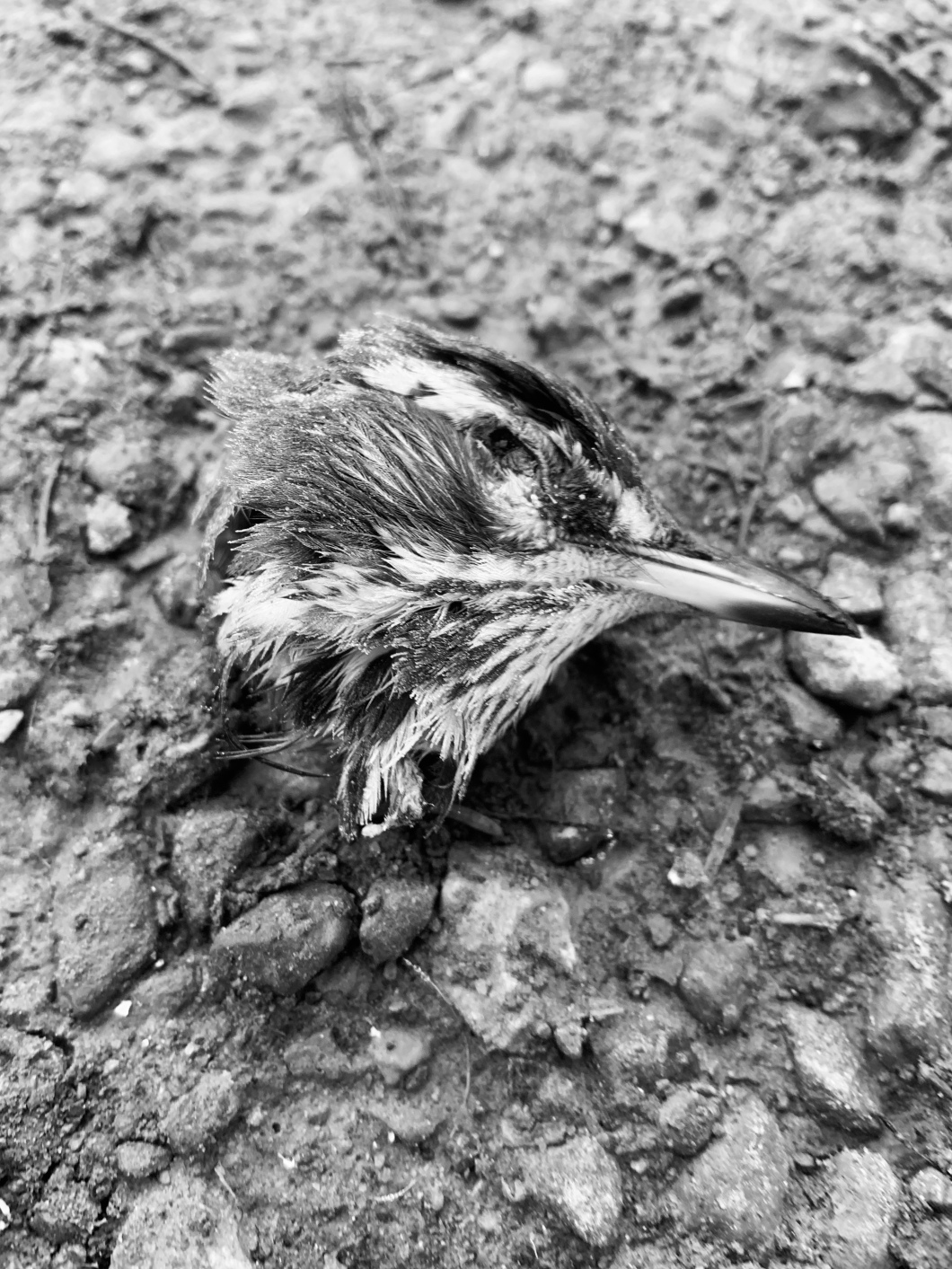 In bird news, I think, and I don’t think anyone else in the ministry has given this a second thought, but I think there is a non native bird in our woods, it was sat on top of a tree yesterday and might have been making a noise I was unfamiliar with. Don’t get me wrong, I’m not some Tony Soper (one for the younger readers there), but when something out of the ordinary happens then sometimes I notice. Tomorrow if I remember I will bring out my Binoculars which I think are in my car under the back seat on the floor, dirty but not broken, the lens may need a clean. Benny has been getting into the chasing of birds now and is leading the dogs on a daily foray into the crop field to chase down crows; as yet there is no luck.

In home news Benny continues to be neurotic and unhinged by chasing shimmering glass reflections and reflections from shine objects, he can spend half an hour looking up at the ceiling at the circular shape of a reflected glass of water occasionally wobbling as the table is knocked. It doesn’t help that we feed this addiction by directing our metal colander up at the ceiling whilst catching the light and creating a very cheap glitter ball effect. He sits there like a cat and when the reflections are at head level for him or a bit higher he will wait in ambush and then jump at the wall, bashing his nose in the meantime. He truly is an idiot dog.

Very sad news also that Mark Hollis, lead singer of talk talk has died in his early 60’s, which is no age. Guy Garvey from “Elbow” in asking why he wasn’t making music anymore received the reply from Jimmy from “Doves” that maybe Mark Hollis had just stopped because he had done what he wanted to in music. It seems strange that someone so talented may just stop because he wanted to, who knows, but it’s a massive shame, on the positive side maybe his death will make more people aware of his music, which is truly wonderful. Enjoy.