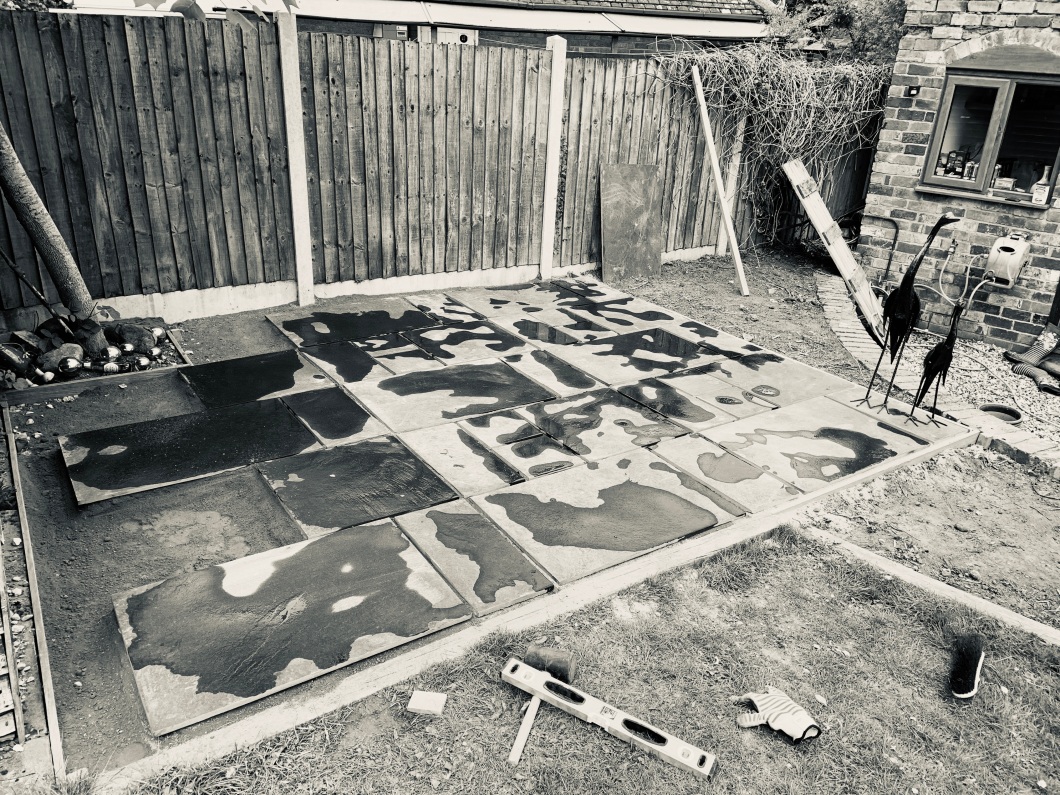 Thats my garden last night, since then a few tiles have been replaced at an amazing amout of physical effort and mental anguish. I shouted and got really cross with myself and everyone who happened to listen on the bank holiday weekend. After all what are bank holidays for apart from Gardeneering, spreading Corona Virus on VE Congas whilst social distancing with ties between the Congalese and realising that you are no good at DIY and promising to yourself that you will never do this again. Of course this never happens because we are skint, money is tight and if I can fuck it up my slef byut eventually get the job done, then its worth doing, right? I’m pleased because I’ve learnt how to do something and Mrs T too, we’ve both learned. But lets get this straight, if I don’t habe ton build another patio for a long time then thats fine by me. This moring I had to remove a few slabs, big ones and smash up a load of concrete, carting it across the garden in a wheel barrow with a flat tyre because the new one I bought was FUCKING SHIT, so flimsy, useful for grass, or maybe dandelion fluff, this was because for some reason I had assumed I would be launching aircraft off the end of my patio, the levels were all off to cock, it was all wrong and as Mrs T pointed it out to me, I pretended it didn’t matter, which it kind off did, so post tantrum and now we’re cooking on gas, except the sand bag, the second ton is empty and so tomorrow I shall be fighting agsinst the economies of scale and purchasing about 15 or even 20 bags of sharp sand, slinging it in the back of the Honda and getting this shit done. This is the reason I draw squares for a living, lifting them is another thing.

In other news, Covid News, theres been whispers in the press since Thursday that there may be some sort of lightening of the restrictions due to our Nemesis Covid 19, well why not? Theres only about 600 people dying everyday, why not open everything up, hell lets do a VE conga (previously mentioned) down Wimbledon high street. Well fucking keep it there you idiots, and stay away from the Kingdom of Quiet Shhhhhrawley. Christ why don’t we sponsor these morons to become Covid nomads and spread the Pox far and wide. Just because other European and other countries world wide have loosened restrictions, doesn’t mean we have to too, its not fucking boarding school, we don’t have to complete, this isn’t a competition. Today I heard that airports may determine a 14 day quarantine on anyone entering the UK, this is coming into effect at the end of May, why not now?

I genuinely feel that I am living in Wonderland at the moment, nothing seems to fit, I avoid the news as I’m sure a lot of people do, not because we don’t want to hear it, we want to hear about the heros, the people who do good, but because of the rhetoric the government is spouting, talking to us like we’re a bunch of kids, they’re all as bad as each other and I don’t believe, I find it impossible to believe that the folks in a suit, trouser or skirt believe what shit they’re telling me, I really do, I despair and when this is over I’m running away to anywhere which isn’t UK or USA, anywhere beginning with a “U”, sorry Uraguay, my patio skills aren’t up to scratch. So I leave you tonight, with the simple fact that the British public are indeed simple.

Stay at home you fucking mentalists